"I'm against it!" was the response I received from one bicycle shop as I went scrounging up my supplies for my latest project.  Truth be told, that was my first thought too when my friend, Ean Parsons, suggested that wrapping my bars the old fashioned way, with cotton bar tape and shellac would be an affordable, classier option than my re-purposed inner tubes.


Ean is one of those guys who lives and breathes bicycles, approaching the whole genre with the sort of reverence usually attributed to a record collector (he's that too).  Where I am someone who is approaching cycling from having been on hiatus from the sport since fourth grade, Ean never stopped.  I respect and appreciate his aesthetic. His suggestion, while initially ignored, eventually peaked my curiosity.  So I asked him if he'd lend a hand for this tutorial.


1. Cotton Tape.  Oak Cliff Bicycle Company stocks Newbaum's, a relatively young company that also makes rim tape, and although other shops may carry it, most don't. I purchased two rolls of gray, and two rolls of orange Newbaum's cotton tape from Oak Cliff Bicycle Company.  Unsure of my color selections, I popped in to a couple other local bike shops and found smug rejection. It's available in 16 colors, and runs 5-7 bucks a roll, but remember to get two rolls if you're going to be wrapping drop-bars.

2. Hemp Twine. This provides a classy finished look to the project.  Forget electrical tape!  You can get crazy with the twine and wrap it around all sorts of stuff, but for this demo we are sticking to the top center.  I found an assorted bag of colored twine for pretty cheap at Joann's, who also stocks the natural jute kind.  Any hardware store will carry twine, but probably will sell you a larger roll than you need for this project,  however if you think you might be using it for other stuff then it makes sense.

3.  Chip Brush.  I'd like to say that it's worth it to use a nicer brush for this project, but I would argue that cleanup is going to be worse on the environment than throwing that brush in the trash.  While I have no empirical evidence to support this claim, I will just say that most of the elements used to make this brush are natural, and biodegradable, including the Shellac, and you don't need a nice brush for this application.

4. Shellac.  There are many options here, but the easiest one is going to be the Zinser shellac you buy from any hardware store.  While you aren't going to use it all before it goes bad, it's readily available, comparable in price to other options like shellac flakes,  and it's easy.  Flakes are something I want to experiment with in the future,  but for now, easy does it.

5.  Corks.  Of course you can source these from any number of places, but the hardware store offers unused, tapered, natural corks, in a variety of sizes.  They are extremely cheap, and fit better than wine bottle corks, and will take shellac very well.

6.  Drop Cloth. You can always wheel your bike outside and not worry about spilling, but unless your extremely careful, you're going to get little flecks of shellac on you're bike.  While I don't know how hard it is to remove them, Ean tells a sad tale about getting shellac all over his bike, and not noticing until he was done. It costs less than 2 bucks, so do it the first time at least until you know what you're dealing with.  This can get messy.

Cotton Bar tape is going to suck up all the muck from your fingers, and although your about to cover up your bars, just remember, you'll be handling them the whole time your doing this, so even if you start with clean hands, you may end up getting nasty scum all over your new cotton tape if your bars aren't clean.  Wipe them down with alcohol or some other solvent, or pre-wrap the bars with electrical tape. 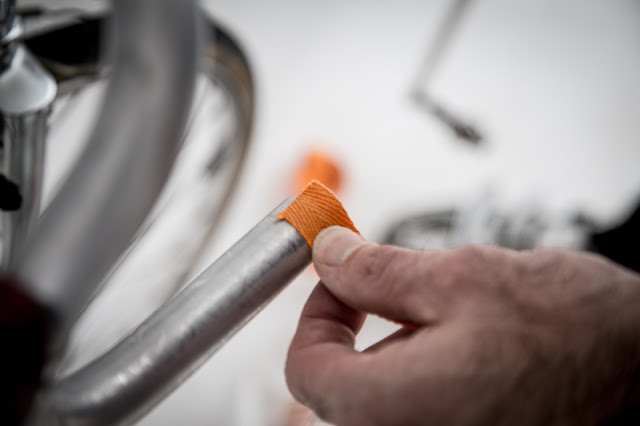 Continue to wrap, overlapping about  1/4" to 1/2".  Watch for bubbles, keep it nice and tight, and don't expose too much adhesive before you need it, or else you'll find yourself sticking it to all sorts of things other than the handlebars. 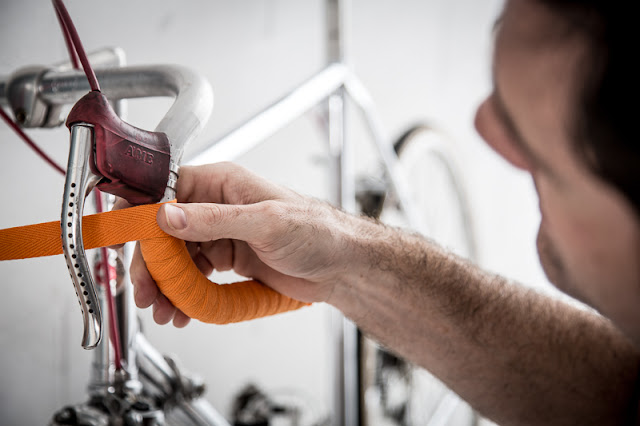 Continue wrapping, making sure you've got no bubbles, you'll want to pull it pretty tight. 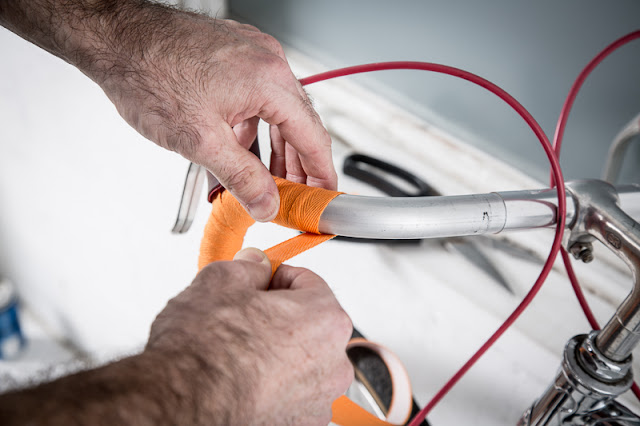 Use sharp scissors, these kitchen shears were a pain.  As I noted in the "Tube Wrap" 'how to', there are many slight variations on this subject.  Here, Ean shows how he cuts his tape at an angle, starting from the outside, and finishing towards the center of the bike, different than what I suggested in the "tube-tape how-to". I thought about this for a long time, and realized, it would be better to do it Ean's way if you were using a different tape that was thicker in the middle, like leather or any of the synthetic tapes, due to the chamfered edge,  so better to learn it this way.


Go ahead and put your corks in, tuck the overhang into the bars and hammer em in, "good n' tight".

For wrapping the twine, you're going to want to cut a length a little bit longer than one "wingspan" (arms stretched out).  I would suggest doing "two wingspan's", maybe 6-8 feet.  You're not going to need it all, but when you don't have enough it's a real bummer.

Starting from one end of your twine, take a section 6"-10" long and "reserve it".  Run your "reserve" along the top of your bars, starting with the end of the twine near the brake lever going towards the center of the bike. 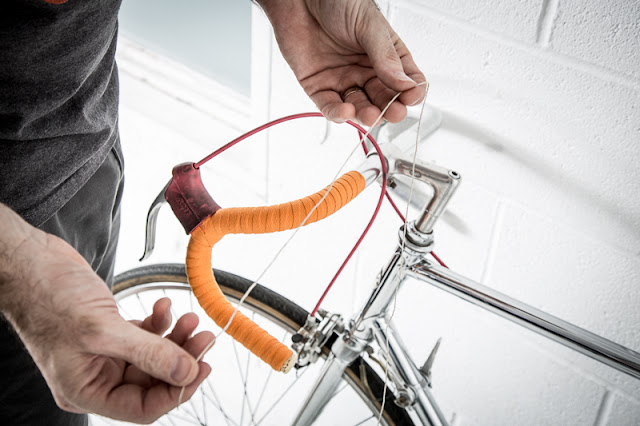 Start wrapping the twine carefully around that little "reserve" piece, starting from the end of the tape going towards the brake lever.

Once you've wrapped about half way of your total desired thickness, you're going to want to take the end of that "reserve" and make a loop.  For the rest of the process, you will be wrapping around both sides of the loop. 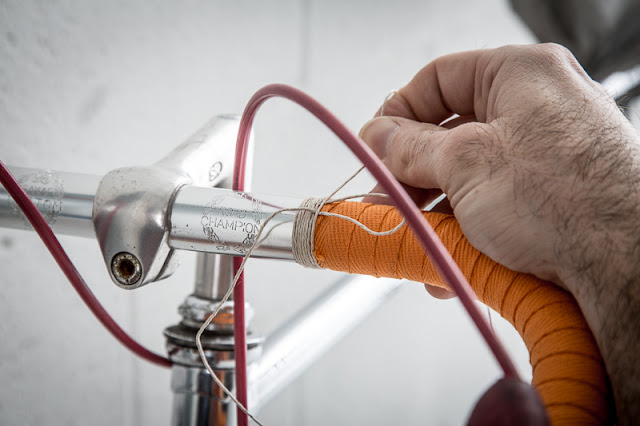 Once your twine has reached it's desired width, take the end of the twine and thread it through the loop. 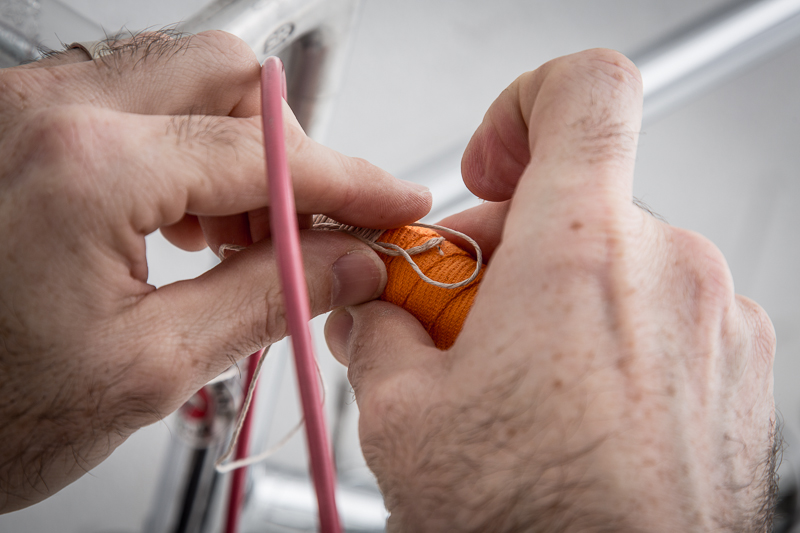 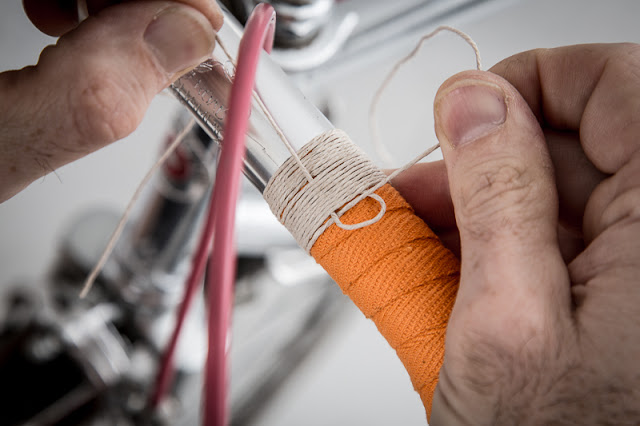 Cut the remainder of the twine, leaving only a little nub, no more than a half centimeter. 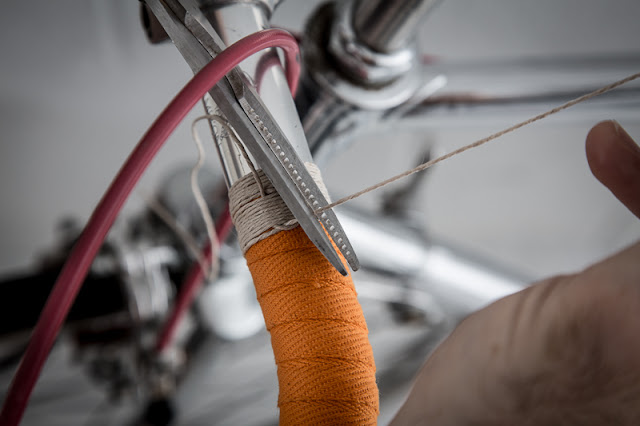 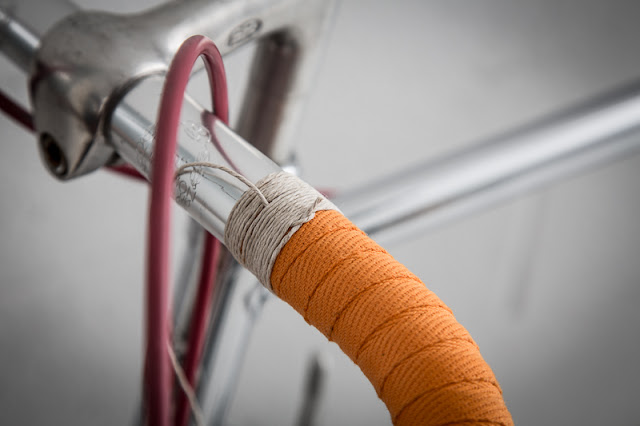 Now pull the other end of the loop, until the cut end from the last step is pulled through.  On the other  side of my bars, my twine did not make it all the way through, however, it posed no problems.


Once you've pulled the end through all the way, clip off the rest of the twine

You can hide the ends underneath the wrapped twine using your finger nail,

It's easier than it looks!  Rivendell Bicycle Works has an excellent video tutorial that should bolster your confidence.  You also get to listen to Mulatu Astatke while you take it in.

Tape off anything you don't want shellacked.  That includes brake hoods, and handlebars.  You may want to drape your drop cloth over your bike right about now too.  I will say, this can pose a problem if you're working outside.  That cheap, thin drop cloth will catch even the slightest wind and blow right into your wet shellac.  Anchor it down if you foresee this being a problem, otherwise, you may find yourself tossing the drop cloth before you're even close to being done.
Shellac is messy, and that cheap chip brush doesn't hold much shellac right at first. Go slow, your brush will start to hold more shellac as you work.  Most people like to apply a thin coat and let it dry.  This allows for a nice even application.  If you get too heavy with your coats, you may end up with drips or an uneven appearance.  Also you may find you're happy with less shellac then you anticipated.
Shellac the corks too, and double check for spots you missed.

After four coats, I was happy.  Three probably would have been good enough. Four coats made the bars feel a little slippery to bare hands, however, with a pair of leather gloves it feels perfect.
This is one classy look, and, while I may have agreed with that -anti cotton tape- shop owner before, I'm very excited about it now.  First of all, it's extremely durable.  If the shellac starts to wear, you can simply apply another coat.  Second, with the proper pair of gloves, you really don't need all that padding that synthetic materials offer, especially if you're on a comfortable steel frame. And finally, as long as you don't put too much shellac, it's very tactile.  You get lots of traction on this setup.  It reminds me of all the marketing gimmicks that saddle makers have employed over the years, pushing more and more padding, while tensioned leather saddles still remain the hallmark of comfort.  This wrap offers no padding whatsoever.  The bars are skinny and sleek.  It feels rough, and hard, and to my surprise, I really like it that way.
Posted by Billy Surface